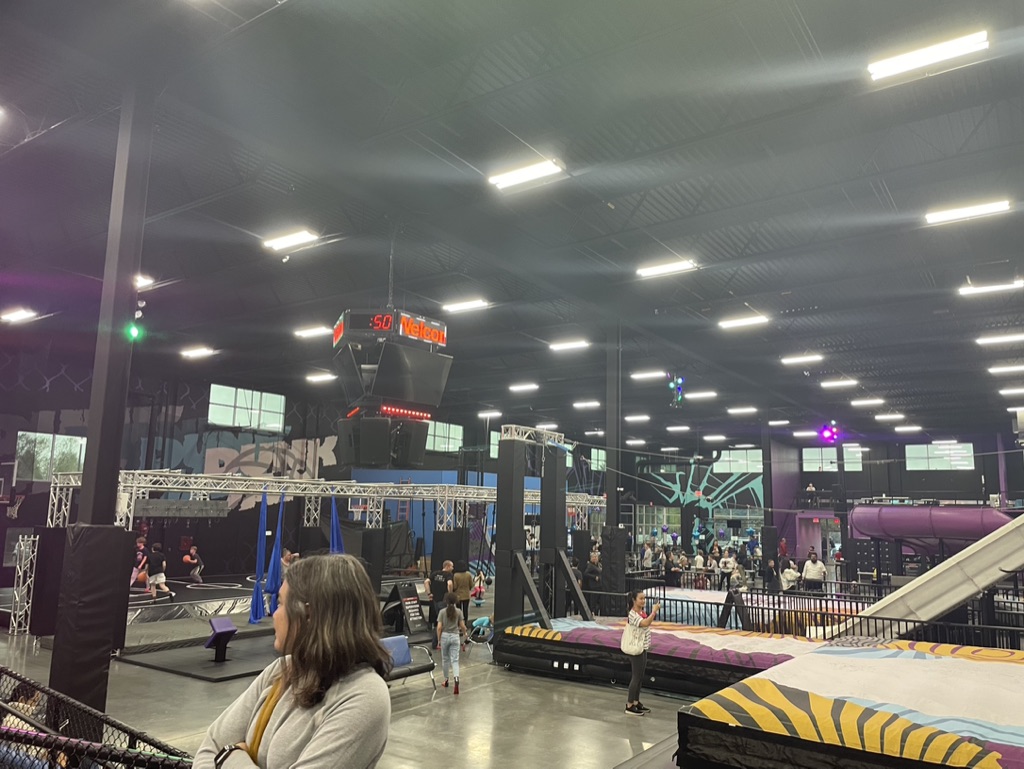 What is Defy Trampoline Park? This is an indoor facility featuring slides, trampolines, basketball courts, swings, and “American Ninja” style attractions. They also offer somewhat limited dining as well as places to have parties. They have over 60 locations nationwide. I visited the location in Beaverton, Oregon.

What does Defy Air Sports Trampoline Park Think of Itself?

Check out the About Us section of their webpage. They talk about breaking the bounds of “normal” sporting activities. They want to attract those that are not interested in team sports. Or they want those who like individual sports beyond those team activities.

Even though this place always has plenty of kids when I go, this “about” page is full of adults. They realize kids are going to love this place. Why not try to sell it to adults as well. Makes sense since they are doing the driving!

There is no doubt at all that kids are going to love this place. What is even better is that kids are learning all sorts of motor skills here. They are also getting plenty of exercise while they are here. The facility is safe, well-staffed, and sits in an enclosed location. This makes it pretty easy to keep an eye on your kids.

Let’s dive in and learn a little bit more in my Defy Trampoline Park Review.

What is Defy Trampoline Park All About

When I first walked into Defy Trampoline Park the openness and brightness of the location was amazing. Seeing every activity in the place when you walk in the door is a great first impression for both kids and parents.

The entrance features check-in desks for parties, general admission, and members. To the left, there are both cubbies and lockers where you can place your belongings. To the right, there was a snack bar with some seating for those eating and drinking.

I visited a location that had only recently opened. Because of that, it seemed as if quite a bit of the staff was still learning on the job. I saw the parents that were hosting the birthday party we were coming here for. They directed us to the party check-in line.

I am not exaggerating when I say they were five people at the desk. Four of the were working on a computer while only one was checking people in! If I was to guess, I would say the other four people did not yet know how to check people in and so they were learning.

Once we got checked in we headed to the cubbies. While you can pay for a locker I am not sure why you would. If someone wants to steal my kid’s used shoes and socks, then go right ahead I guess. The kids got “grippy” socks when they checked in so they could walk out in these I guess :).

The Defy Trampoline Park review verdict: Food or No Food

The food area was a bit of a disappointment. They had two monitors above the counter that I assumed would contain the menu. These were not operational the first couple of times I was there. I’m all for soft openings and getting the kinks out of a new business. Yet seeing as how this place has 60 locations already this is disappointing.

Once the monitors were on the food was pretty underwhelming. I didn’t try on any of the food except for the pizza. I had this as part of the birthday party that we were attending. What they offer is typical snack bar food. Pizza, nachos, and the like. It is something kids will find acceptable and adults should skip.

Well let’s face it you’re not coming here for food or unique places to store your shoes! You are coming for the entertainment and physical activity that this place promises. There is no doubt that when you focus on that, this place is a home run. Let’s learn more about what makes up this place as we continue this Defy Trampoline Park review.

The cornerstone of the Defy Trampoline Park review: The Attractions

All the attractions here at the park follow the same basic model. It is kids jumping, running, hanging, or sliding. This all happens with some sort of protective padding below and around them. That said, each attraction has its own specific features.

Just as it sounds this is a small basketball court that has hoops at both ends. There are free-throw lines and three-point lines.

What makes this court unique is it the floor is somewhat padded. Also, the hoops are lower which makes it perfect for kids of all ages.

There’s also plenty of padding along the edge of the court. There are nets at each end of the court to keep the balls from flying all over the place.

In the back of the facility, there are some single basketball hoops. These have trampolines below them so kids can do some crazy tricks and slam dunks.

There was a small zip line here, a trapeze-style swing, and then the type of swing you would see at a playground. There was also a platform that kids could jump off of.

All these rides ended with kids jumping into an air mattress/mat. Although this may sound a little bit dangerous, the design is pretty darn safe.

You might think the trampolines would take up more of the square footage here and would be a big part of this Defy Trampoline Park review. The fact is that it is a small space. It encompasses 12 trampolines in a 4 x 3 arrangement. At the ends, there are a couple of 45° angled trampolines. There is padding surrounding all the trampolines. That means kids are not going to hit any metal or mechanisms while they jump.

There are several what I would call “foam pit” attractions here. They include a jousting event where kids hit each other with padded sticks from a balance beam. There is also an obstacle course where if the kids fall they would fall into the foam pit.

One of the highlights of this area is an attraction in the shape of a cross. This spins around with padded arms that kids try to jump over or slide under as they go by. Once again the floor has plenty of padding so the chance of injury is pretty small.

This was a favorite of both my kids. It came in both small and large sizes. It is very “American Ninja Warrior” style in that it goes from 0 to 90° pretty quickly. The goal is to get a running start and then use your grip socks to try to “climb” the wall and then grab the rail at the top. Believe me, it is much harder than it sounds. If they do make it to the top there is a fire pole they can slide down behind the ramps to get back to ground level.

This is just as it sounds and it is very similar to the things you might find at a Chuck E. Cheese or McDonald’s but just on a much larger scale. Definitely, a good place for smaller kids to explore but I did not see bigger kids spending much time here.

This might be one of the most popular spots here. It is a flat court with netting all around it and then padded 45° angle walls on each end of the court.

Kids fire large balls at each other. They are part solid but part foam rubber to keep kids safe. For the most part, there is no one leading the activity here that works at the facility. Kids seem to figure out their own games to play inside here.

There is generally always a staff member here. They watch the activity to make sure kids remain safe.

Although I didn’t have many negatives about this place in my Defy Trampoline Park review the food was definitely one of them. Now to be fair you should not be coming to a place like this is expecting fine dining. Even with that, the pizza, nachos, and pretzels that they serve are pretty mediocre. Especially when compared to another kid’s activity like K1 Speed.

On top of that the first couple of times I came here they were not serving any hot food. It seems it was because they were not prepared to do so. They were making pizzas but this was only for birthday parties. The parties were taking place in their birthday rooms.

Speaking of which, they did have areas on both the second level and the first level for parties. These were pretty basic affairs with nothing more than tables and chairs. As parents, you supply all the fun (don’t you always?).

I am still not sure if their pricing is incredibly clever or incredibly stupid. I got my kids a membership for around $26 per month with a minimum three-month commitment. If you were to do jumping for three weekend days you would be spending the exact same amount.

My guess is that if your kids come here once they are going to want to come back. Two more times at a minimum. So as a cornerstone of my Defy Trampoline Park review I would say a membership seems to make sense.

I guess their hope is that you’ll forget you have it and then it will auto-renew. Then they will ding you for an extra month that maybe you do not want. Get the membership-put a reminder on your phone to cancel!!

The Defy Trampoline Park review verdict: Should You Take Your Kids?

I feel certain in telling you that your kids will have a blast here. What is even better is that they will be getting tons of physical activity. They are also most likely to meet some kids that they don’t know already.

Your cost for your kids it’s going to be roughly $12 per hour. If you do a membership, your cost boils down to how much you actually come during your membership time.

Don’t expect too much from the food and beverage. Also, if you plan on sitting and waiting for your kids, expect a whole bunch of noise and chaos around you. I saw people trying to work on their laptops. Not sure how they did it. I know I could not.

The bottom line-this is a great place for kids and the adults that are in tow have to revel in the controlled chaos. Sounds like a lot of parenting, eh?

What is there for parents to do if they are not jumping?

If you are not going to partake in the jumping yourself there are plenty of couches and benches to sit on. They do have televisions scattered around the facility. When I’ve been there they’ve been off quite a bit or if they’re on they are showing pretty random sports.

I generally try to bring my headphones and listen to music or watch a movie or a TV show on my phone while I’m here. I saw quite a few adults with laptops sitting at counters doing work. Good for them, but I am not sure I could do that.

Did you ever see any kids get hurt?

I have now been to the facility for over 10 hours and I have yet to see a child get hurt (knock on wood). That is not to say it cannot happen.

They seem to keep a good staffing level in place. There’s plenty of padding on every attraction. With both those things, the chances of getting hurt seem pretty low.