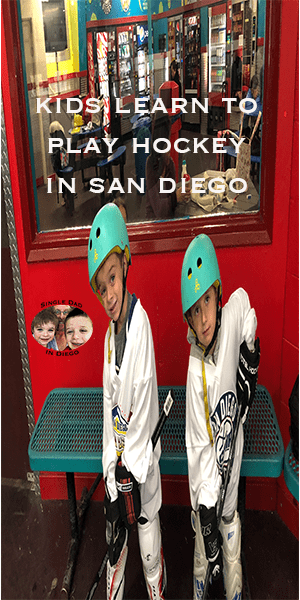 I have been a huge hockey fan my entire adult life. I have played quite a bit of roller hockey, but very little ice hockey. So naturally, I was interested in finding out how kids learn to play hockey.

I asked my kids if they were interested in learning to play ice hockey. Since I knew there was no way I could teach them, I started trying to find a kids’ hockey school in San Diego.

So my kids learn to play hockey in San Diego review covers the program I chose for them.

One of the reasons I chose the program I did was:

So it seemed I had nothing to lose (or not much anyway). Hockey can be an expensive sport so when getting a 5 and a 4-year-old into it, I want to make sure they are going to keep at it before I go sinking a ton of money. The program delivers what it promises, but there are some caveats.

If you want to let your kids dip their toes in the (frozen) water, this is a great way to get them started at a reasonable cost and with enough time involved to truly let them see if they like it and want to continue.

So as all parents know, there is a constant challenge in finding things your kids will:

I started my kids in hockey at the San Diego Ice Arena. This kids hockey school in San Diego offers a program where the kids could get on the ice for six weeks, get all the gear they needed, learn to skate and play and do all this for free!

Sound too good to be true? OK here is the catch..the “gear” they are talking about is used. That is not much of an issue because, at these young ages, kids grow out of things so fast, the gear in question was not used much.

Now when you look at their website, it seems just a bit misleading to me. It comes across as if they are getting brand new gear.

That could be the way I am reading it of course. There is the cost of having to buy a jersey and a stick for each child. That was a total of $32 for each kid.

I did not test what would happen if you brought your own jersey and stick for them. I guess that this is how they are getting at least some money out of you for this so I doubt you can bring your own and save the cost, but I am not sure.

They do offer free rental skates (figure skates or hockey skates), and they do provide free helmets (more on this). They also have skating instructors, and of course, the kids get on the ice for 1 hour.

So the summary of my kids learn to play hockey in San Diego review is that this kids hockey school in San Diego offers a deal that is hard to pass up even if there are some quirks. So let me dive into the details of my experience thus far.

So upon entering the arena, you are greeted at the customer service window that is located at the pro shop desk. We all proceeded inside the pro shop to get signed up. You receive a swipe card for each child, and you also purchase your stick and jersey for each.

This is the point where I was left a little wanting. The girl at the counter was friendly enough, but she did not really seem to have much info about the program I was signing up for.

Question: So where do they get the gear?

Answer: If they are just learning to skate, they really only need to have skates.

So why am I buying a stick and jersey???

Question: So they do not need any pads?

Answer: Well if you want to get them some you can. It is all in the room behind the visiting team’s bench.

So technically they are getting what is promised, but I found the entire sign-up process somewhat lacking. Luckily for me I know quite a bit about the game, the gear, etc..so I was able to figure it out. If you do not, well this could be a real issue that may have you heading for the exit before you even get started.

First trip on the ice

Once the 10:45 a.m start time rolled around….nothing happened. There were kids figure skating all over the ice. A few minutes later an announcement was made (that I could not make out, to be honest), and all the figure skaters headed to the far end of the ice and they put down some pads to create two small “rinks” for the hockey kids. The kids started filing on to the ice, so I told my boys, “let’s go.”

In this area there were several figure skaters in bright green jackets (attempting to) teach the kids how to:

This actually went pretty well. My kids as part of this kids hockey school in San Diego were following along with the other 10-15 kids that were part of this intro program. In the rinks defense, skating is kind of learning to ride a bike without training wheels. There is really nothing to do but try it, get some tips, fall a great deal, and repeat.

So that made up the first 30 minutes of the hour on the ice.

All of a sudden, all of the figure skaters in green jackets just disappeared, some pucks were thrown down, and the kids were left to themselves to “learn to play hockey.” Again I will come to the defense of the rink, the kids that were in the more advanced area were doing a lot of hockey drills working on all manner of skating and stick-handling.

While this was going on, another confused parent was asking the same question out loud:

Where did everyone go and who is running this?

So it is fair to say that the kids can pick up the skating they need to get to the next “level” of the program; however, the whole thing seems highly disorganized. You would assume this kids hockey school in San Diego would be in the business of trying to get as many kids playing (and loving) hockey as possible since that is THEIR business. So for me, there is certainly quite a disconnect in play here.

I felt I was fending for myself almost all the time. Again not so much of an issue for me because I think I know enough for it to be all right and in the end, the kids were skating (and having a blast!!).

Words to the wise before kids learn to play hockey

As I often found myself doing in situations like this, I just started talking to other parents and asking the staff questions. The best information came from parents that had been there quite a bit. They told me that private lessons for the kids can accelerate the process.

When I asked the staff what happens after the free six weeks the answer I got was:

You can pay to keep going. If you want to know more you should probably talk to one of the coaches.

Awesome! Who are they and where are they????

Words to the wise 2

I mentioned the helmets and skates. First the skates. The first week my kids were in figure skates. The second week when I went to get skates and they saw the kids had sticks they said: “You probably want hockey skates?”

Sure that made sense. Trouble was, for kids just learning how to skate, incredibly dull rental hockey skates were tougher than figure skates that by their very nature have a better “edge.”

As my kids kept falling, one of the green jacket instructors said just as much and I switched them back to figure skates.

I will probably stick with this and if they keep going, I will most likely purchase hockey skates for them.

So week one I put them in one of the many helmets hanging on the wall at the kids hockey school in San Diego at . Seemed OK and when we were done, the skate counter folks took them from us. Week two same process but when I take them back to the counter, the guy says “can you just hang these up?” I say “you don’t want to clean them first?” He says “we will, just later today”

You are probably asking the same thing I was thinking, how in the world will they know which helmet (of the hundreds hanging there) I used, when are they going to “clean” it, and how many people will use it before then? How many kids used the helmet my kids used between “cleanings?”

Gross!! I bought them hockey helmets and you should too right from the get-go so they are:

Another expense I know but WELL worth it if you ask me! In fact, if your kids keep at this, you need to come to grips with the fact that hockey is a VERY expensive sport so if that is not for you, move on to soccer or baseball!!

So in summary about kids learn to play hockey

I wrote this kids learn to play hockey in San Diego review thinking I could provide a little first-hand insight. Given how haphazard the whole thing has been, I’m glad I did. One point to make though, do not let that dissuade you from visiting this kids hockey school in San Diego.

The kids have a blast!! They are just learning to skate now and for that, this program is more than fine. For the relatively small cost, it really is pretty hard to beat. As we keep going, I will provide updates on the kid’s progress and also my progress in trying to figure out how this program works and progresses.

Beyond the helmets did I buy them anything else?

I actually did. The used gear I got at the rink was OK but did not fit great and was more trouble than it was worth.

So I splurged and bought them both these starting hockey gear sets. So now they have their own gear, with their own bag to carry it in (although I will probably still have to carry it all!!). Ultimately I want them to be safe and I think this, along with the helmet with cage I bought them, is the best way to do that.